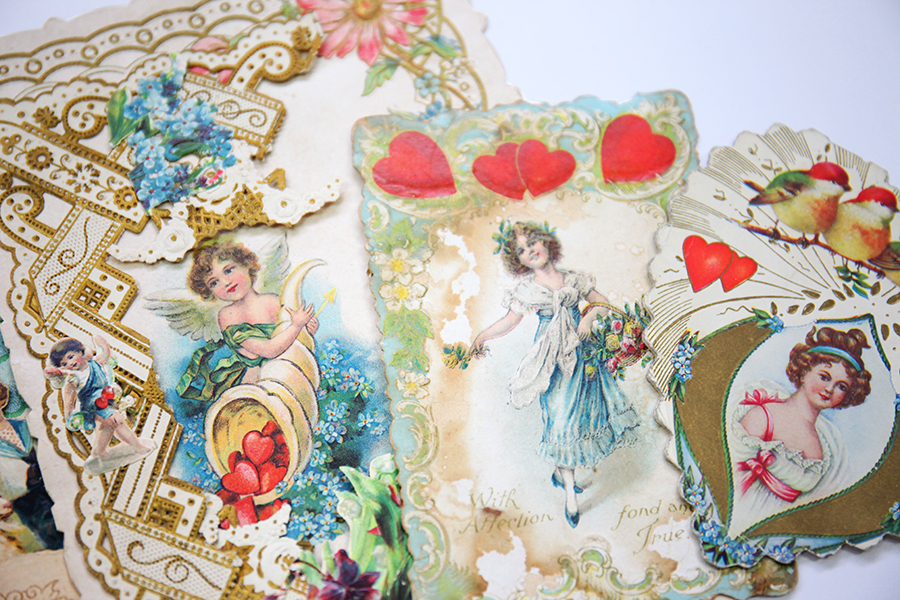 – FYI, they did not originate with a Hallmark marketing scheme!

Valentines started  with The Feast of Saint Valentine, memorializing the execution of 2 early Christian martyrs of the same name, on Feb 14th on different years, in the 3rd c. A.D.!  By the 5th c. this feast day came to coincide with a pagan festival of animal sacrifice, fertility and scantily clad revelry called Lupercalia, leading Pope Gelasius I to suppress it by combining the two occasions into St Valentine’s Day.

The first mention of Valentine’s Day and romantic love came from the English poet, Geoffrey Chaucer, in the 14th c.  In the 15th c., Charles, Duke of Orleans, while imprisoned in the Tower of London, sent his wife the first known Valentine love poem. It resides today in the British Library. (Sadly, his wife died before receiving it.) The oldest printed Valentines date from the 1700s and were typically slipped under a door. They featured handmade cupids, lace, love knots, doves, poems, and coded “flower language.” In Victorian England a curious (and salty) variant popped up: “Vinegar Valentines” which were all about insults, mockery, criticism, and all manner of grievances, from personal to political!

In 1849, Esther Holland of Worcester, MA started a home business making Valentine’s Day cards with a staff of local ladies, and it was soon wildly successful. In the late 19th c., improvements in printing technology and advances in postal services (such as the Penny Post in the U.K.) created a phenomenal surge in posted, printed Valentine’s Day cards.  Collecting the by now ubiquitous Valentines cards into albums became a “thing” as the new card tradition took off.  The New England Valentine Company soon capitalized on the trend, as did Hallmark in 1913. And the rest, as they say, is history!